>If you’re wondering about my apparent misspelling of “new kitty”, check out icanhascheezeburger.com. You will be amused.

This week, and more specifically today, I worked on unpacking all the boxes I had packed back in April when we thought we were going to do a DITY move to Texas. Ha. If only I knew then what I know now. I will never pack another box until there is a moving truck waiting for me outside. And even then, the Army will be packing our stuff for the next five years.

Anyway. Here are a few pics of the updated arrangement.

New table from Wally World.. I can spread out all my sewing stuff and not have to worry about cluttering up the dining room table! I made new curtains for this room too but the photo wouldn’t rotate for some reason. It’s a cute vertical stripe print with cream, brown and pink. Here’s a swatch.. 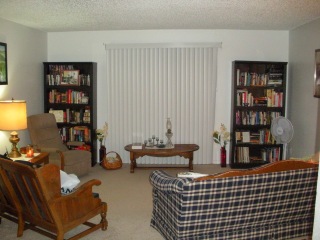 New arrangement for living room, which I really like. We have way too many books. It’s funny because only 3/4 of one of the shelves is our collection of DVDs and TV on DVD.

The top and bottom trivets are from my grandma on my dad’s side. I know the top one was a wedding gift to them in 1952! The owl one I got at Salvation Army for 50c.

That’s what I did today, along with grocery shopping, a load of laundry, signing my lease for seven more months (and a reduction in rent since I was on a month-to-month), and playing with Luthor…

If you haven’t read on Facebook already, I got this kitty yesterday from some friends who were feeding him as he was roaming around outside for a few weeks. He obviously belonged to someone because he’s neutered and declawed, and healthy. I took him in since I wouldn’t have the expense of the neuter and declaw surgeries. He’s doing well so far, as you can see. We named him after Lex Luthor on our favorite show, Smallville.

This week was a weird week. I felt so elated from the race and being in Chicago last weekend, and at peace about things. Then Monday through Friday I worked and felt like I had no life because I was sick, too, so I was trying to rest as much as I could. Thankfully I’m feeling almost 100% better today, or at least right now. I didn’t run or exercise at all this week. Cross-training or lifting weights would have been ideal. I didn’t eat well either.

So here’s to a new week… and the advent of marathon training tomorrow with Gabriela. She has a ten-miler planned for us! I’m nervous but know I can do it. Two weeks from today my sister-in-law Katie and I are running the Turkey Trot 5K in Schaumburg. Woot!