>How in the world did this happen? Only five weeks left? I remember when I was getting excited because it was *only* six months away. Wow.

I ran only 18 miles this week…

Sunday: one-hour hike with Becca
Monday: rest… again
Tuesday: 5-point-something miles… good pace (<10:00)
Wednesday: Nothing.. had an SVT episode at work and was just all around not feeling very well. The episode itself lasted less than 20 seconds, which was good.
Thursday: Had no time to run.. Thursdays are always very busy.
Friday: Came home early from work (early dismissal into SPRING BREAK!) and ran a half marathon at my goal pace of 10:18/mi for 13.07 miles.
Saturday: Nothing today.

Yesterday I looked like a nerd running through Peoria.. I was decked out with my ear band, gloves, heart rate monitor/watch, and Camelbak. I wore the Camelbak because 13 miles would take me over two hours and I wanted to stay hydrated. At one point I ran past some high school boys who were wearing t-shirts and shorts (it was only 35* or so)… I probably gave them something to laugh at with all my gear. It doesn’t look so silly when Gabi and I are running out on country roads in the wee hours of Saturday mornings.

Anyway, I felt pretty good for most of the run until the end when my calves really started cramping up. My Nike+ iPod sensor went kaput, so I just went by my watch and estimated if I was keeping a steady pace. I think I did… 10:18 is fabulous distance pace for me. That means I can step up my mile and 2-mile paces. Eek.

My average HR according to the monitor was 164, which is great. But the high HR was 203, and that concerns me. I don’t doubt that I’ve probably had SVT while I’ve been running. But it’s different because my HR is already high, so it’s hard to tell if I am or not. Unfortunately, I never caught the 203 on the screen when it happened. I’m not sure what else it could have been. I didn’t sprint at the end and hills give me a HR of about 180-185, never over 200.

I know it’s only been a month since I cut out all caffeine, drinking fluids like crazy, and taking the iron pills. Aaron suggested something that kind of makes sense.. that my sodium is too low. That totally makes sense. When I’m being careful about what I’m eating, I get only 1500-2000 mg of sodium daily. And if I’m sweating a lot while running and not replacing what I lost, I’m probably not absorbing enough water… it’s a thought. I will ask the doctor about it when I go back in a couple weeks for more bloodwork.

It’s amazing to me how all the systems in our bodies have to work together.. it’s amazing we’re all alive at all, much less functioning correctly. I am determined to get this under control because the last thing I want is to have to take medication to control it.

After the marathon, I will be decreasing my weekly mileage to probably 15-20 miles, and maybe take a break from long distance running for a couple months until we get settled in El Paso. I say this now, but I’ve heard once you run your first marathon, you’re hooked.. For. Ev. Er. We shall see! 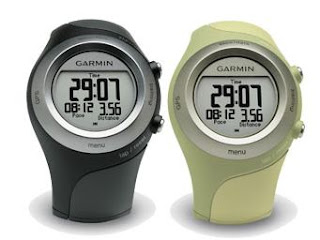 Mine will be green. It has GPS and a HR monitor.. it will tell me exactly how many miles I’ve run (the Nike+ iPod thing is only 90% accurate). Excited!