I’ve been waiting to post this! I made the bulk of my Christmas gifts this year and could hardly wait to share what I created! As you know, I love to sew. Sewing was one of my first loves, after Jesus, piano, and Spanish. I learned how to sew a button on as soon as my little fingers could handle it. Knitting came much, much later… years later in fact. One summer I stayed with my grandparents for a week while Aaron was in Arizona and decided that I would ask my grandpa to teach me how to knit. How I wish I had a picture of us! We sat out on the patio in the bench swing, my hands fumbling the whole time. However, after my best friend Amelia showed me a different method, I finally understood and off I went!

So, with tutorials, YouTube handy for knitting help, and lots of time snuggled on the couch with the husband, I endeavored to make people pretty things. (Well, I tried to snuggle. It’s kind of hard with two needles in your hands. ;))

Here are some new things I tried (disclaimer: I apologize for my awful awful photography skills):

It looks really complicated, but mostly it’s just knitting, yarn overs, and passing the slipped stitch over. I made this scarf for my mom for her birthday, which was in October. I got really frustrated at first, trying to keep the same number of stitches as I went through, but after a few rows I had it down. My blocking can definitely use some practice, though!

This following picture is of a hat I made for Gabi. I had to try it on! 😉 It’s technically a lacey pattern; it’s just hard to see it from so far away. I LOVE the color. It’s the Caron Simply Soft yarn. It’s inexpensive and soft.

Oh. My. Gosh. I cannot believe how much I love cabling. It’s easy too! I made this chunky scarf for a friend, and the hat for my Hunk-a-hunk-a-burnin’-love. He picked out the yarn himself.

Friends, these are so easy and FUN. I found a lot of them on Pinterest. It really helps the visual/tactile learner like me who unless someone is literally holding my hands, showing me how, I just can’t.

I designed my own knitting tote-ish carrying thing for my Amelia. Yes. My Amelia. And all from a picture on Etsy!

This is a purse with Asian-inspired fabrics for my sister Emily. I used an actual pattern for this. There was this one time, well, when I bought like 10-15 patterns because they were all on sale for $1!

For my new nephew I made a  little knit hat with mitts in Bears colors. I should have knit on some little ears to make it look like a bear! This boy is gonna have SO many knit things… I really want to make him one of those hats with “beards”. 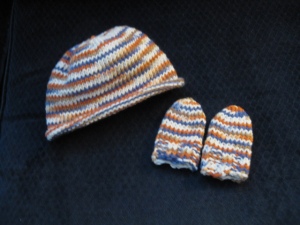 For his older sister, Lena, I made her a “Mommy and Me” journal where she and my sister-in-law Katie can write and draw pictures back and forth. I also bought some cool pencils and included stickers!

I don’t have a picture of it but I made my other sister Leah a three-piece centerpiece for her dining room table. It was just three glass jars with old books pages and fabric Modpodged. I also made a matching table runner. She loves it. 🙂

So there you have it. I was a busy bee all of 2011. My knitting has really come a long way, and I’m currently in the process of a late Christmas gift for my friend Megan and Rand’s baptism present. They’re both turning out very nicely! While handmade gifts are usually inexpensive, I think they mean a whole lot more than something I could buy. And while I could sell some of the things I make, I get so much more joy out of giving it to someone.

You know you’ve made some cool stuff when you’re tempted to keep it all! 😉

2 thoughts on “A handmade Christmas”