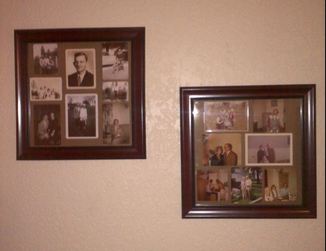 I bought these frames and arranged these pictures shortly after my aunt sent them in the mail. I finally got them up on the wall tonight. You can’t see from the picture, but they are on the wall that joins the living room and the hallway. I think I put them there on purpose, so that I could be reminded of him, and family, often.

It still hurts, and still takes me by surprise. Today I was thinking that November 9th would have been their 60th anniversary and I got choked up, right there in the middle of Starbucks. If I’m feeling this emotional, I can’t help but think how my grandmother feels this week. So, if you have a chance, say a prayer of comfort and healing for her, especially as the holidays approach as well.

When I went home in June for the funeral, I felt like I had some closure. For the most part, it felt complete. But now that we’ve planned our trip home for Christmas, I know there is more to deal with. Family, at least for me, is such a present part of our lives, joining with us in the grief, joy, sorrow and healing. For holidays and birthdays. For deaths and births. This will be our first round of holidays without him.

After the pictures found their place on the wall, I just stood there and contemplated for a minute, thinking about the circumstances under which each photo was taken. There’s on in the frame on the right of my grandparents outside on the farm in front of the deck. All of a sudden, a memory rushed like a river into my mind, of when I was little and we were leaving one time, and Grandpa would hold me and bounce down the deck on our way to the car or station wagon or whatever we had then. And he’d always hug me a little too tightly, even when I was grown. As painful as memories can be, I wouldn’t trade them for anything.

My emotions have been building up all day. When I was sewing, I was listening to some old music on Spotify, the music I listened to when I was little like Steve Miller Band, Bachman Turner Overdrive, Chicago, and John Mellencamp. Maybe it’s because Mellencamp is from the Midwest, but when I listen to him, I can just see a late autumn, early winter Illinois country road sandwiched in between harvested, dormant fields against a gray sky with a hazy sun trying to peek through the clouds. I remember many trips home from the farm in the evening, the winter sunsets and electrical towers blinking in the distance. Maybe a train racing us along the highway. It made me homesick, and then that combined with finally hanging those pictures… yeah. I’m a hot mess. And of course, listening to Miranda Lambert’s “The House That Built Me” didn’t help either.

And of course when we’re home we will visit the cemetery in Farmer City, but I should declare to myself until then that he is not in the ground, it’s just his earthly shell. That’s how my mom described death to me when I was little, that it’s just their shell. He is celebrating his eternal life right now in heaven. Thank you, Jesus.