We’re almost a week down in Deployment 2013-2014. I have this nifty little thing lovingly called a “Donut of Misery”, and right now mine looks like this: 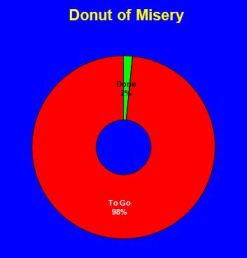 Lovely, right? Whew. 2%. We may or may not be a little farther into this than what this says, but we don’t know exactly how long he’ll be gone.

Honestly, I have had a great week. That totally goes against normal expectations. I had finals this week, so I had that to keep me focused. I finally have a total break from everything.. school, work, husband. Naw, just kidding. 😉 I spent the entire afternoon at the spa yesterday, which is something I never thought I’d say. Aaron set me up well before he left with a gift certificate for my birthday. I informed him that he can get me a spa package for every birthday, anniversary and Christmas from now until I die. Srsly.

The weeks before this week, however, were a funny sort of purgatory. You know how it goes… super emotional, crazy, clingy, just downright insane. Me, not him of course. It was probably the worst time we had on the eve of a separation. But now that he’s made it to his destination safely and we’ve been able to chat a few times, and finals are over, I’ve been feeling really really good.

I have a few theories as to why I feel so great even though he’s just left.

1) Basic training had very very little communication. We hadn’t been apart for about two years and so it felt like it was new. There was a lot of hype surrounding his leaving for BCT… it was finally a new job for him, I didn’t know if I was going to move to Arizona with him, etc. I was also still in my first year of teaching and approaching the end of the school year.

2) AIT (job training) in Arizona was spent apart because I had chosen to keep my job in IL so that we could pay down some debt because at that point we literally could not afford for me not to work. We’d be broke.

3) Korea…. ohhhhh Korea. Ugh. Ugh ugh ugh ghafesrjghrabi&!&@##. This was probably the single most frustrating thing I’d ever experienced. I quit my full-time job. Derp. I should have known better than to quit before I knew for sure that I’d be heading over the big blue ocean. It was a ridiculous waiting game of whether the Army would approve me to move over there, and then after five months of that BS we just decided that it wasn’t happening. On top of that, we had no idea in which country or when we’d see each other again.

Now… well, now we’ve lived in El Paso for two years. We have an amazing set of friends who really are family to us (including some fellow Illinoisans!). I just successfully finished the first year in my Master’s program, with one year to go. I know where I’ll be seeing Aaron next, not just when. We’re not absolutely drowning in debt, in fact, we’re making great progress. I know the job I’ll be working six, even twelve months from now. I have the best canine companion a girl could ask for.

We’ve been in this life for four years now. This separation is what happens when you sign up for the Army. You learn that life doesn’t start when he gets back; it keeps going. It’s not just you acting like you’re strong; you are strong because of what you’ve gone through, and that’s okay. It’s okay to not be ridden with sadness or anxiety over him leaving. It’s okay to enjoy life. It’s okay for him to make the most out of his time overseas, too.

So, time to kick this into high gear, dudes!